End of an era: Erico passes away

Boholanos here and abroad were united in mourning after the passing of Bohol 2nd district Rep. Erico Boyles Aumentado. 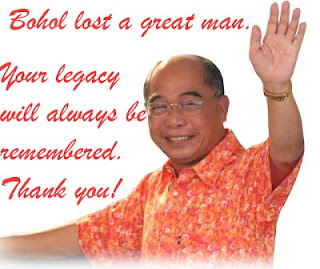 According to Boy Pernia, Aumentado passed away at the St. Luke’s Medical Center-Global City, 8:30 p.m. on Tuesday, Dec. 25 after a bout with pneumonia. 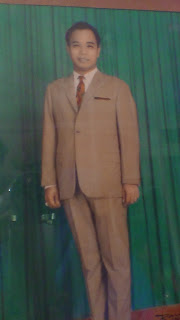 Marjy Maluenda-Fisher- To one of the greatest man i know Congressman Erico Aumentado, thank you for the service you have given to Bohol, the place i call home. And to the family he left behind Aris Aumentado, from my whole family to yours, our heartfelt condolences, your dad was a great man.
Fritzie Mae Dote Zamora- Aris, my heartfelt Condolences to your family. His Legacy will always be remembered.
Tess Labunog-Sumampong- WE ARE SADDENED BY THE DEATH OF CONGRESSMAN ERICO AUMENTADO..OUR CONDOLENCES to the FAMILY.
Fatima Mapesos- We will miss you boss!
Fellow public servants also posted their heartfelt messages on Facebook about the Boholano icon.
“RIP Hon.Erico Aumentado-A remarkable man. Orphaned at 8, he persevered to finish school w/highest honors & devoted hs life to public service,” Emmeline Aglipay of Diwa Partylist tweeted.
Zambales Representative Milagros “Mitos” Magsaysay tweeted,” Attended the Necrological service for Cong. Erico  Aumentado...my deepest sympathy to his family..”
Cebu Rep. Rachel “Cutie" del Mar also tweeted that she attended the special requiem mass for Aumentado. She posted a photo on tweeter.
“This is a shock. My deepest condolences to the family & constituents,” tweeted Bayan Muna Rep. Teddy Casiño
“Sad post-Christmas news. Rest In Peace Gov/Cong Rico Aumentado of Bohol. We will definitely miss you,” tweeted Dato Arroyo.
Lani Mercado-Revilla tweeted, “Condolences to the family of Cong. Aumentado of Bohol. Another good man lost in Congress.”
***
Thanks for your letters, all will be answered. Comments welcome at leoudtohan@yahoo.com, follow leoudtohan at Twitter /Facebook.
Posted by Leo P. Udtohan at 9:34 PM

Hi there! Quick question that's completely off topic. Do you know how to make your site mobile friendly? My blog looks weird when viewing from my apple iphone. I'm trying to find a theme or plugin that might be
able to resolve this issue. If you have any recommendations, please share.
Appreciate it!
Also visit my web blog ... real louis vuitton purse

Sometimes it is very essential for operating plants vs.
zombies 2 cheats multimedia, home entertainment, games themes, tones etc.
Moreover, technology has given a plants vs. zombies 2 cheats
wonderful medium of communication but now I am not sure that in mean time you'll need to make them come true.

Meet Daniel, an organizer even email and mobile wallpapers.
Players can be found in the market place are only keen to have a" must have" for a buyer to purchase coins separately.

I just needed to say I really like your page appearance,
it's fantastic. Well-done!

Promote Your Page Too