A different Princess (The Princess Analiza of Tubigon, Bohol) 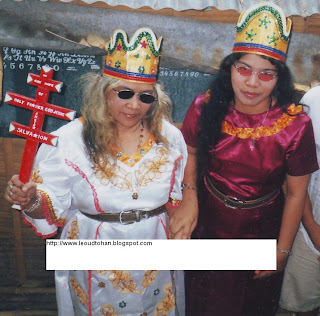 When she appeared on TV years ago, she was an instant object of ridicule. Everyone who saw her laughed at her as, they made fun of her “fashion”—colorful gown with Biblical messages, necklaces and other stuff—even if she is not really that bad looking though—but people treated as if she is a nutcase.

And so Princess Analiza of Tubigon town, her so-called kingdom has become a byword to many of having different personas: a woman with esoteric wisdom and a person having a supernatural power.

Her kingdom is actually at the top of the Ilijan Hill in Ilijan Norte, five kilometers from the Poblacion, a protected municipal park for flora and fauna.

Her journey
We met the princess in August 2002 when we asked her to feature her for national TV networks.
Her domain Ilijan Hill was chosen to become her niche for her to practice her hermit passion.

Halilie Laylah Demeras Analiza, whose real name Lucrecia “Nene” Duterte Aplacador had an epiphany in the late 70s and started to become what she is today. She led a group known as “Subano Group catholic Holy God Spirit (SGHGS)” which had followed her to the hill and has stayed on top since. She and her followers have grown accustomed to the life on top of the hill that her group has yet to return to the lowland for 20 years now.

Princess Analiza before she became the leader of the esoteric group married Isaac Aplacador who is with her o n top of hill. They got married before the epiphany that came to a simple lass that changed her life forever.
The couple was blessed with three children: Arcadio, Jose Baniecito and Laoro, all born on top of the hill. However, Laoro died at an early age due to unknown illness.  After the incident, Nene who was very frustrated sought God’s help, instantly a divine force helped her to overcome her sufferings in life.

Months later, she related the God Holy Spirit gave a “mission” to her and she became Princess Analiza.
Her mission: to pray while walking, inside the church, sea, cemetery and forest. She was also told to live in a small nipa hut and give birth to a baby girl.

She gave birth to the girl by herself without any aid or help of a midwife. The baby turned out to be Prinsesita Mier Ve Batong Orange Nonon Luningning or Batong Orange.

Different belief
It is not easy to enter her kingdom although they welcome other people visiting them. They said though the
Princess only entertains people with pure hearts. At least 17 families are members of the group, which includes people from all walks of life.

The group considers the hill as sacred that is why they are choosy on the kind of people they receive in their domain.

The lijan people speak their own language and only them could understand it. Our interpreter-member Mawin told us that the spirit taught them the language they are using.

The Princess would give out blessings good enough for two years and hand out spiritual names to her followers. A pattern though could be observed in the names of the members where the word WIN will be added to your name while the word MAR will be added if you are a female. So, if your name for example is Leo, you would be called Leowin subject to the approval of the Princess since she is the only one authorized by their group to give out spiritual names.

The group maintains they are no cult, contrary to the perception of other people unfamiliar to their ways.  The Princess said that they are not doing magic rituals, spells or use symbols that are identified with the underworld or to Satanic cults. To prove that their group adhered to the Being up above, the group adopted the catholic Church’s teachings as they are also have statues of saints and use of Catholic songs and prayer books where hey also attended mass in their chapel. The Sunday mass is officiated by an elder since the Princess does not mingle with the group during this time as she is contended by giving out instructions.

The history, mission and practices of the group has been edified so that their members and the next generation would be able to practice and keep their belief alive.

But what strange is the singing of the last part of the national anthem, they sing “ang MABUHAY nang dahil sa iyo,” instead of the original “ang mamatay nang dahil sa iyo.” They believe that their vision tends to bring in ponderous logic and believed to have mysterious healing powers. However, the Princess said, “it means to show unity.”

Princess Analiza believes every human being is completely responsible for his own actions. To her evil is a choice that is made by man and should expect punishment as a result, while blessings will come and go when you are good.

She also holds the ancient belief on reincarnation—the after-life.

Healing powers
Princess Analiza is said to have ability to bring fortune to those who believe in her, foretell calamities and heal the sick.

There were stories from the members that the Princess healed them. The late barangay captain of Ilijan Norte Rogelio Lamalinao testified that the people in the hill once cured a man who had a severe gangrenous wound. Since the man has no resources to pay for an operation, he opted to seek healing from Princess Analiza’s group. During the healing, Princess Analiza raised both her hands as if asking for a divine intercession, when witnesses attested they saw as if an expert’s hand massaging the patient.

In other instance, the village head said while he was still a policeman, he had to climb the steep hill to see for himself and examine a dead baby who was not buried because their leader told them that the dead baby will not undergo decomposition. True enough, he found the boy’s body placed inside an urn in squatting position with clear eyes opened, without any sign of decomposition, even after over a year.

There was no way they could embalm him or introduce preservatives to the body, considering the place is bereft of science and technology.

No regrets
The Princess expresses no regrets of living a life on top of the hill. Despite the supernatural power she possesses which keep people to wonder with awe and respect, she still has the heart of a mother and she is a Princess in her own rights. (March 27, 2005)

Trivia:
The Solid Rock, the Ilijan Hill in old times was known as wizard's place.  It is the Kingdom of King Antipone and Queen Fairystil. Long time ago, people borrowed things and wedding gowns from this place.

This post offers clear idea for the new visitors of blogging,
that really how to do blogging.

Stop by my web site; made simpler

Feel free to surf to my web-site - hurricane impact windows

Promote Your Page Too